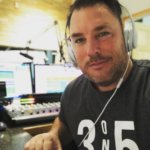 Johnny has been waking up The North Country since the 90s. His familiar and friendly voice broadcasts to 1000s every weekday on The Border 106.7. Johnny is a strong part of his community. Helping to make the lives of his listeners better. He’s raised well over a million dollars for Children’s Miracle Network. His support of Animal causes like the SPCA of Jefferson County has had him in The Dog house and up high for homeless pets. Johnny is a true influence r in NNY on one of the Most Listened to Radio Stations, The Border 1067.