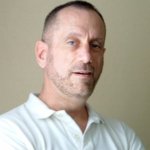 Ken was born in Mechanicsburg, Pennsylvania on January 26, 1961. Ken got his passion for radio when his aunt and uncle took him to a local station. He got his break in radio through his Earth and Space Science teacher who was a part-time jock for WKBO.

After graduating technical school with an Associate’s Degrees in Specialized Electronics, Ken moved to Fairfax, VA. In Northern Virginia Ken worked at several stations. Eventually, Ken was hired at WAVA in Washington, DC and promoted to Production Director. From there he moved to Los Angeles and later Tampa. During 2001 Ken was hired as program director in Honolulu.

Ken came to Watertown in January of 2012.

Ken also works with Premiere Networks to convert classic mono editions of American Top 40 with Casey Kasem to stereo. Ken’s hobbies include collecting vinyl records with more than 10,000 45’s in his collection, playing with computers and being dad to his toy poodle, Missy.