The Only station that Really Rocks the North Country 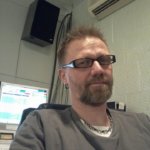 Music has been my crutch since the 1st time I heard Meet the Beatles & after that, Kiss Alive II. 1st 3 records bought were when I was 7… The Beatles Live @ the Hollywood Bowl, Kiss-Destroyer & the Alice Cooper Show.

I started playing drums in the 5th grade. Got in my 1st band when I was 13. Then I switched to singing when I was 19. I was in a band called Waxt that had a pretty good run. We opened for bands like the Toadies, Nonpoint, Cold, hed (P.E.) & Chevelle. Then we had MCA records pay for our final demo before it all fell apart.During this time, I got into radio, thinking it would help me land a record deal. Never happened… the band broke up… & radio was a full time gig.

Have been in the North Country for a lot of years now. My wife likes it here. My kids like it here. &, with a special needs child, this place rocks. You’ve got the DPAO, the CP Clinic, CMN… & many good people… so hanging here long term was a no brainer.

My spare time is spent hitting the occasional concert (Foo Fighters, Metallica, Rage Against the Machine, Clutch, Pearl Jam & the Rolling Stones are among the best), watching the occasional movie (The New Star Wars, Snowpiercer, Stake Land & Battle Royale are movies I recently got into), binge watching TV series (Dexter, Orphan Black, Game of Thrones, the Wire, Breaking Bad, Walking Dead, Hanibal, Homeland) or catching my Cubs, Dolphins or Bulls. I also indulge in the occasional tasty beverage (Corona & maybe a shot of Cabo). & maybe I’m coaching your kid with mine in baseball… maybe.

I also like pimping the occasional worthy charitable event… whether it’s Out of the Darkness, March4Babies, the CMN Radiothon or something for the DPAO. For all my Rockaholics on Fort Drum… thank you for what you do… from the bottom of my heart, I cannot thank you enough.Lots of good people in the North Country. Lots of kick ass Rockaholics. Thanks for keeping me employed. Hopefully, I make your day a little better. You guys RAWK!